Punished by the Warrior - His To Command

It's Memorial Day weekend, the traditional kickoff of summer!  So sit back, take advantage of that extra day off and celebrate a long weekend with lots of hot, sexy spankings.
Today I'm introducing my brand new Sci-fi spanking romance His To Command.  InterStellar Commander Amanda Jane Norris is on a secret mission from Earth to a remote outpost on the Blue Planet Neodyma, where women are kept as sex slaves.  She's been captured, stripped naked and spanked in the town square.  Now Kaden, a fierce warrior, announces he will be her Master.  He has no idea she's never had sex with a real man. 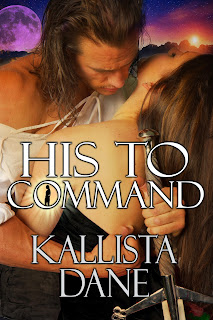 “One thing you must know about me, Tajina.  I told you I will never punish a woman for having a mind of her own.  But I do require obedience, especially when I’m focused on bringing pleasure to both of us.  Now lie back and spread your legs for me so I can examine the charms I’ll be enjoying tonight.”


AJ automatically backed away, shaking her head wildly.  This stranger kept her off balance.  She’d had no time to calm herself, no time to mount any sort of mental defense, let alone attempting to control him.

Now he wanted her to part her legs willingly and allow him to engage in some bizarre act of physical intimacy.

When Amanda Jane Norris sets out on an undercover mission to infiltrate the ranks of a rogue general on the planet of Neodyma, a world which has turned its back on modern technology, she has complete confidence in her ability to complete her task. But then things go terribly wrong…
Captured by the power-mad general, Amanda’s ordeal begins with a thorough, intimate physical examination which leaves her both utterly humiliated and helplessly aroused. Her body’s intense response to the embarrassing procedure ensures that she will be sent to join the harem the general provides for his men, but only after she is punished for her failed attempt at espionage.
After a long, hard spanking in the public square, Amanda is fitted with the red tail of a harlot and prepared for her training.She is given first to Kaden, a warrior on a secret errand of his own. He quickly proves more than willing to compel her submission with a firm hand applied to her bare bottom, but his plans for her are very different from the general’s.
When Amanda first experiences the intense pleasure that a man’s mastery of her body can bring, it is unlike anything she has felt before, and though it fills her with shame she is left begging for more. But can she afford to risk asking for Kaden’s help bringing down the general?