Did Maddie Taylor Earn an A+ From Her Professor - or Did He Give Her a Big F? Lanie's Lessons by Maddie Taylor

Kallista:  Maddie, I like to start out with forcing you to confess just one of what I'm sure is a long list of kinky things you do when you're not writing hot sex scenes.

Maddie:  (Looking uncomfortable)  Um… We have a toy chest.  You will find I use items other than spanking implements quite often in my contemporary stories.  I’ll let you wonder which ones I have tested out personally.  Enough said…

Kallista:  Hmmm.  (Pulls out notebook) As a professional interviewer, I'm going to need details.  Are you actually writing while you're testing them out?  Is that why your books are so hot?  Also, you''ll have to provide the buy links for your favorites when we're finished - purely for my research purposes.  Now - on to the next shameful revelation. If you could run away with one of your male heroes, which one would it be?  And why him?

Maddie:  I fall in love with all of my heroes, but I have to say my heart belongs to Tony Rossi from Captain My Captain.  Although he can be very intense and quite strict, he is also very loving, protective of his woman, kicks ass first and asks questions later (with the bad guys), and is totally HOT!  However, I am no masochist like Megan, and if he came at me with a paddle or cane I’d safeword, I know I would.  He was my first hero and will always hold a special place in my heart.  He also has a military officer bearing (stern, no-nonsense and authoritative), which leaves me tongue-tied and drooling. Oh, and did I say he was hot??? Tall, dark, handsome and Italian… YUM!

Kallista:  YUM indeed!  I love Italian too.  Especially the Chicken Alfredo at Olive Garden.  But I digress. Shouldn't have scheduled this interview just before lunch.  Next question - how many books have you written?

Maddie:  Unbelievably, I’m up to fifteen published books and three have been included in boxed sets.  I have another one in editing that I hope to have out by the end of the year.

Kallista:  You must be really good at typing one-handed!  How long does it usually take you to write a book?

Maddie:  Depends.  The spirit of creativity (and naughtiness) has to moves me.  When it does, they roll off my fingers.  I wrote Everything Christmas in 3 weeks, although it is a novella, it seemed effortless.  Other times I’ll stop and start, take a break and then come back to it later, at times much, much later.  I started Unbind My Heart, Club Decadence book 4 in the fall of 2013 and it wasn’t published until July ’14.  I work full time so I can’t crank them out, as some of the more prolific authors, but 15 in 18 months is pretty good, I think.  However, it’s never fast enough for my readers and me.

Kallista:  Personally I prefer it slow, but to each her own.  Can you give us a hint about what you’re working on for your next release?

Maddie:  I’ll give you more than a hint.

Kallista:  We'll be waiting for both of them.  Meanwhile, Lanie's Lessons is out now and your fans can read it as fast as they want.  How about giving us a little peek?

Maddie:  In this scene, Ethan has a surprise for Lanie. In the guise of stern Professsor Fischer, he selects her outfit and orders her to present herself in his classroom for a much needed lesson in deportment.   Enjoy… 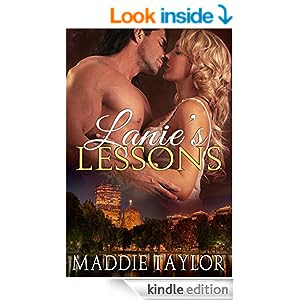 “Bend over the desk.”

On shaky legs, she stepped forward grateful for the support of the sturdy surface and the coolness of the wood against her heated skin.  Positioning her head so she could see him, her eyes followed as he moved behind the desk.

Intensely aware of his every movement, Lanie gasped as her focus centered on his mouth as he sucked her juices from his sodden fingers. She moaned uncontrollably wishing he was drinking directly from the source.

He glanced up at the soft sound, slowly sliding his fingers out of his mouth. But he wasn’t finished. Once free, he spread his two fingers and lapped up what was left with a long glide of his tongue, from tip to tip and along the dip between.

“Shh, no talking during lessons. And it’s Professor Fischer or sir to you, Miss Langston. You won’t die from delayed gratification, no one ever has to my knowledge.”

Attorney Lanie Fischer is a force to be reckoned with in the courtroom, but the stress of her caseload has been mounting relentlessly. She puts on a brave face at work, but behind closed doors Lanie has become an emotional wreck, and her husband, law professor Ethan Fischer, is tired of watching her self-destruct. She’s not sleeping, she’s lost weight, and their sex life is starting to suffer.  Something has to give, and as far as he is concerned,it is time for a radical new approach.

From now on, Ethan decides, his wife will be spending quite a bit of quality time over his knee with her bottom bare, learning some lessons she has needed for a long time.

But can she live happily as a loving wife and obedient submissive at home even as she battles in court at work every day, or will the conflicting demands tear her apart?


“Take off the rest of your clothes.”
Her cheeks flushed but she did as she was told, trembling a little, eyes downcast the entire time. She dropped the bra and her hands moved to the nipple rings.
“Not those,” he said.
He saw the look of dismay on her face, but she never protested. She bent forward to unhook the garters. Slipping off her shoes and balancing on one foot, then the other, she peeled the stockings off. Finally she reached behind her and unhooked the lace garter belt, letting it fall to the floor. He let her stand there for a moment under the bright lights of the lab, naked, and just stared. Her body was beautiful. Full, lush breasts, narrow waist, hips that flared out.
“Come here and lie across my lap.” As she walked toward him, the portions of her brain that registered fear and anxiety responded strongly. But so did the center for arousal. She put one knee on the sofa, awkwardly supporting her weight with her hands as she draped herself across his lap.
Her body was warm and soft and when she let her full weight rest on him, he felt his own body respond. Without thinking, he stroked her bare ass and ground himself up against her, just a little. Harmon didn’t need a machine to tell the instant she felt his cock pressing up, hard and ready. Her sharp intake of breath did that.
Grabbing her wrists with one hand and holding them out in front of her, he smacked her bottom sharply with the flat of his palm. The computer screen exploded in lights. He started spanking her steadily, firm but not too hard at first, watching with clinical detachment as her lovely bottom turned pink.
He spanked harder and it took on a darker shade of red. As it did, her pain centers on the monitor glowed brighter and brighter. Her fingers dug into the fabric of the sofa but she never moved or made a sound.
He wanted more, wanted to see what she’d do once he broke her tight control. He shifted his legs a little and spanked her slowly, sensuously, rubbing the hard bulge in his pants back and forth across her wet slit with every whack. A soft moan escaped her lips. The sensors recorded a huge spike in endorphins. The pleasure centers of her brain were sending off fireworks. Harmon smiled to himself.


“Get down on your knees in front of me,” he demanded, letting go of her wrists.

Buy it now on Amazon


Kyra Thornton is in serious trouble. Her former boss has disappeared after stealing every dime from the company' trust account and framing her for the theft, so when the FBI offers her a way to prove her innocence and escape prosecution, she hesitantly agrees. All she has to do is go undercover, take a job working for billionaire technology entrepreneur Jake Harmon, and find evidence to prove the FBI’s claims that he masterminded the crime.

There's just one catch: Jake is a Dom, and he’s looking for someone who can be both a financial officer for his company and the perfect sub for him. Kyra has never been a sub—but under the circumstances she is left with little choice, and she soon finds herself stripped bare and on her knees awaiting Jake’s every command.

To make matters worse, her new master quickly proves more than ready to punish any disobedience with a long, hard, deeply humiliating spanking.But to Kyra’s shock, Jake’s firm-handed dominance and skillful mastery of her body leaves her not only blushing with shame and aroused far beyond anything she's ever experienced, it also leaves her yearning for more.

It isn't long before she feels a growing need to submit both her body and her heart to the dark, mysterious billionaire. But when the time comes to fulfill the bargain that kept her out of prison, can she trust Jake to protect her, or will she cast aside her new-found love to save herself?