I loved Stevie MacFarlane's book Amelia:The Marriage Market and I'm thrilled to announce the next of her feisty heroines, Grace Wentworth, now has her own story.  I talked to Stevie about her books and how she's followed her dreams in life.
Kallista:  Stevie, I think when we're young we all secretly have big dreams for the future.  If you could have been told one thing that you weren't told when you were a teenager, what would you like to have heard?
Stevie:  I would have liked to have been told that I could do anything.  My mother was a hard-working woman and she loved to read, but she was very down-to-earth.  I think her dreams had been crushed many years before I was born.  It wasn’t that she didn’t believe in me, I just think she wanted to shield me from disappointment, so she was always trying to tone down my dreams.
Kallista:  What specific thing have you done that impressed yourself?
Stevie:   I wrote a book, and readers actually liked it.  I’m very proud of that.
Stevie, I want you to know that I'm one of those readers!  Give us a peek at what we have in store in Grace:  The Marriage Market Book 2. 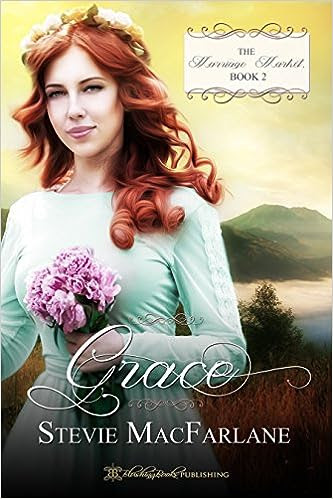 “How did you find us, Mr. Blackthorn?  Any paid assassins lurking about?”
“Miss Lane, you wound me,” Jonah said, patting his chest.  “As a gentleman, I feel bound to assist a damsel in distress.  I am here to offer my services in protecting your dear friend, Miss Wentworth.”
“Actually, Mr. Blackthorn, we weren’t in distress until you appeared,” Grace spat nearly quivering with anger.   “I would have thought being bested by two helpless women, ‘damsels in distress’, would be enough for any man.  Perhaps you’d better stay away from the ship’s rail on this voyage unless you’re a very strong long-distance swimmer.”
Watching his lips thin, Grace smiled in delight.
“Believe me, Grace, you only got away with what happened in Omaha because I didn’t want to hurt you or your partner in crime.  If you’d been men, the outcome would have been very different, I can assure you.”
“Sounds like sour grapes to me, Effie,” she said with a pitying expression.  “It’s sad when a man is so insecure he can’t admit to being beaten at his own game.  Coffee, Mr. Blackthorn?”
“No one’s been beaten,” he growled, “at least not yet, but there’s a good chance a couple of young ladies may yet get their bustles blistered.”
“Ah, resorting to threats is usually a man’s last alternative,” Effie said with fake sympathy as she patted his hand.  “I’ll have some coffee, Grace.”
“Listen you two; I’m trying to help you.”
“Help us what, Mr. Blackthorn?  Put five thousand dollars in your pocket?”

Blurb:
Grace Wentworth and Effie Lane were cautiously optimistic when their dear friend Amelia decided to travel west to become the bride of a man she'd never met. Despite their misgivings they were stunned when Amelia wrote informing them she'd made a dreadful mistake in marrying Mr. Jordon.
Determined to rescue her dear friend from the clutches of a scoundrel, Effie made plans to leave for Seattle immediately. Grace would follow when she could get away from the ever watchful eye of her mother. Everything changed when Grace was forced to accept the proposal of a cruel and violent man. Suddenly her mother's wrath could not compare with what she would face as Horace           Remington’s wife. Throwing all caution aside, she fled with Effie even knowing her mother would most likely hire a Pinkerton man to find her. However, she never expected to fall for him as they played a game of cat and mouse from Chicago to Seattle.
For Jonah Blackthorn, apprehending a runaway socialite seemed like an easy assignment. Locating two young, inexperienced women would take him no time at all and the five thousand dollar reward offered by the frantic fiancé would go a long way as Jonah had plans to leave the agency to begin a new chapter in his life.
What he didn't plan on was being outwitted by the brats or the fact that Effie Lane wasn't relying on her wits alone to get them safely to Seattle. He also didn't expect to come to care for the redhead traveling with her gun-toting friend. When he finally caught up with them he was going to give Grace the spanking of a life time or kiss her senseless. Maybe both.

Author Bio:
Best-selling author, Stevie MacFarlane, lives in Upstate New York with her husband of many years.  They have a huge, close-knit family and frequently host twenty-five or more guests for dinner on weekends and holidays.  She currently has 16 books out, including two very popular series, Sugar Babies and The O’Malley’s.  To explain her writing preference she used a quote from her Amazon Author’s Page.
“All of my books are romances. I like a lot of conversation, a bit of humor, some fairly hot sex and spanking. If you're into whips and chains, these probably aren't for you. However, if you've ever watched a movie where the leading lady is being a perfect bitch and you feel like yelling at the leading man, "Oh my God, spank her you fool!" these might be right up your alley.”