I've been away from blogging for awhile and while I was gone, my fellow authors have been busy!  My friend from Down Under, Kelly Dawson, is here today to share a scene from her hot new novel The Ways of the West. 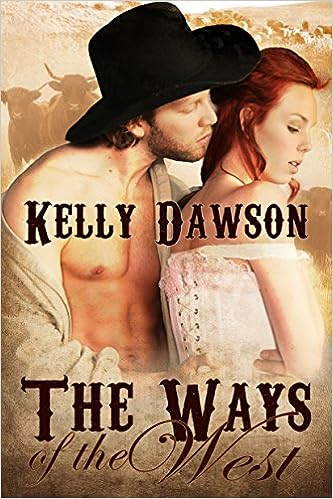 “We could use another man,” Mr Jordan said, scratching his chin. “We could use both of you actually. Can you ride miss?” he looked at Jessica.


“Oh no.” Jessica shook her head, disgust dripping from her voice. “No way. I’m not staying with a bunch of filthy, stinking cattle men! Drovers smell! We’re not staying here!” She stomped her foot, sending a cloud of dust swirling up around her, making her cough. “I didn’t come all the way out here to play nursemaid to a herd of stupid cattle!” she declared between coughs. “I want to go home!”

Mr Jordan frowned, then turned away. “I’m sorry you feel that way ma’am.” He strode back towards the camp, his fists clenched tightly by his sides in anger.

Jessica could feel the men’s eyes on her. Had they heard her? She hadn’t spoken that loudly, had she? Gulping, she knew that she had. Her objections hadn’t been spoken softly, purely for the benefit of Johnny’s ears. No, she’d shrieked her outrage loudly at the very idea of making camp with these men; they would have to be deaf not to have heard her.

She felt Johnny’s hand grip her arm then she squealed as he hauled her roughly up in front of him on his horse, draping her belly-down across his saddle, her body balanced precariously on his legs and dangling down either side of the horse, the saddle horn pressing into her side.


The Ways of the West
Orphaned by an attack on her family’s wagon train, Jessica finds herself stranded a thousand miles from Boston, the only home she has ever known. Only one man—a rough, dusty cowboy named Johnny—stands between her and the perils of the west, and he quickly makes it clear that he is ready to do whatever needs to be done to keep Jessica safe, whether she likes it or not.


When the unlikely pair stumble upon a cattle drive and they are both offered employment, Johnny doesn’t hesitate to accept. But after Jessica loudly expresses her disdain for his plan and for cowboys in general, Johnny decides it is time for drastic action. After a hard, embarrassing spanking followed by a tearful apology to the trail boss, Jessica is left with a sore backside and a strange yet undeniably powerful need to be held close and comforted by her handsome protector.

With Johnny by her side—and claiming an ever bigger place in her heart with each passing day—Jessica begins to adjust to life on the trail. But a cattle drive is a dangerous place for anyone, let alone a city girl with a penchant for disobedience. If he ever wants the chance to make Jessica his wife, Johnny knows he’s going to have to take her firmly in hand before she gets herself hurt or killed. Even if it means a painful, humiliating bare-bottom strapping she’ll never forget, one way or another he’ll teach her the ways of the west.

Author Bio:  Kelly Dawson loves anything to do with horses, rodeos and cowboys, and loves to get lost in a good book - preferably a rural romance where a strong woman falls in love with a ruggedly-handsome, tough but gentle cowboy, and these are the types of characters who feature in the stories she writes. Only in Kelly’s books, the cowboys are even better because they spank!
She lives literally at the bottom of the world in the South Island of New Zealand, with her husband, four kids, a dog and a cat.