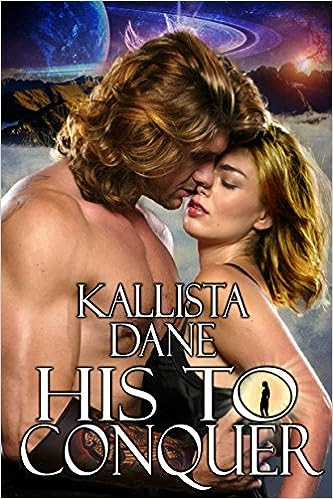 Sori seized her wrists and bound them together with a length of rope, then secured it to a hook on the front end of the table.  At the same time, Leto wrapped another rope around one of her ankles, pulling it to one side and securing it to another hook.

“Do not move.  You will submit to anything your Master and Mistress choose to do to you – or you will be punished even more severely.”

Talia felt the tip of the invasive probe pressing against her tight rear passage, then gasped as Leto worked it inside her.


His To Conquer
When diplomat Talia Anderson travels through a star portal to Gadolinium, an ice-cold planet settled thousands of years ago by Viking explorers, she expects to find a peaceful society waiting for her arrival. To her shock, she instead emerges from the portal into a city in the midst of an invasion by a band of ruthless, warlike creatures set on conquest of the planet.

After she is waylaid by the invaders, Talia is saved by a tall, handsome stranger, but later that night she ends up as a captive of the barbaric creatures nonetheless. Upon arriving at their stronghold, she is informed that she will soon be auctioned as a slave. To ensure her ability to please her future master, she is subjected to a thorough, intimate physical examination, and her efforts to resist merely result in painful, humiliating punishments which leave her bottom sore both inside and out.

Since he first came to her aid in the street, Prince Kylar has been unable to get Talia off his mind. After learning of her capture, he sets out to free the feisty, beautiful Earth-woman. His rescue attempt proves successful, but Kylar quickly discovers that Talia will require a firm hand to keep her defiance in check, and when she disobeys a simple order he takes her over his knee for a long, hard, bare-bottom spanking.

Back amongst his people at last, Kyler takes it upon himself to introduce Talia to all the pleasures a man’s dominance can bring. His masterful lovemaking leaves her both blushing with shame and quivering with desire, but is she truly prepared to submit fully to his conquest of not only her body but her heart as well?

Need another spanking?  Stop by and visit all the other great spanking posts today!
Posted by Unknown at 9:11 PM