What Happens When Mom Is Naughty? 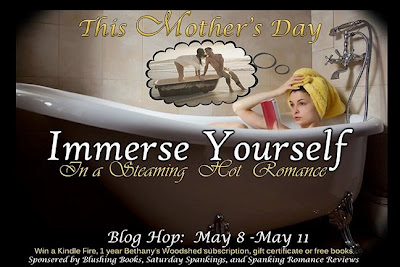 Happy Mother's Day and welcome to our special blog hop in honor of all the Moms out there.  Hope you all enjoy breakfast in bed - even if you do have to clean up the kitchen afterwards!  We've got some great authors participating. And we have some wonderful GRAND PRIZES donated by Blushing Books:

Kindle or Nook
· 1 Yr. Subscription to Bethany's Woodshed
· $25 Gift Certificate
Grand Prizes are available to anyone over 18 years of age using Rafflecopter. Many ways to enter are available, and you can enter as many times as you want, so come back daily!  You'll find the Rafflecopter link at the end of this post.
I have an extra-long excerpt for you from Twelfth Night, a book that's dear to my heart, published by Blushing Books.  I confess - it's based on real people.  But I'm not telling who!  I'll pick one person at random from everyone who leaves a comment below to win a copy of either Twelfth Night or my newest BDSM romance Reckless Obsession - your choice.
Here's the setup for this scene:
Matt and Kayla have been married for years and have two kids.  While facing tough times, they grew apart.  But they still love each other and they've both vowed to find a way to rekindle their romance.  Here's what happens when they come home from a party at the neighbor's house.

“What are you doing?” Matt asked, as he watched her bustling around the room.

Twelfth Night
It's Christmas Eve and Kayla still doesn't have a special gift for her husband Matt. Times have been tough. Money is scarce. But money isn't their only problem. Matt has been cold and distant. Kayla's been stressed, losing her temper and taking her frustrations out on Matt.

Matt has his own idea. He's determined to take charge at home. From now on, if Kayla acts like a child, throwing temper tantrums, he'll treat her like a child - even if it means yanking her over his lap for an old-fashioned bare bottom spanking every time.

Will living out Kayla's forbidden fantasies bring them closer together? Or will it be Matt's firm hand on her bottom?
Blushing Books      Amazon      Barnes and Noble      AllRomance eBooks

Give yourself the gift of time to relax this Mother's Day.  Visit all the other great authors!